A Healthy Reef in Indonesia

In the lower Florida Keys, a coral breakthrough has been made. Due to the warming and acidification of the oceans, almost ¼ of all the world’s coral has died in the past few decades. But now, there may be a solution.

Eight years ago, while moving a coral colony from one tank to another, some polyps that had grown over the substrate onto the bottom of the tank broke off. Vaughan assumed he had killed those polyps, but a few days later they had doubled in number on the glass bottom.

This is how Vaughan discovered the amazing healing ability of coral. When damaged it races to regrow, perhaps to prevent territory loss. This is the basis of Vaughan’s latest ambitious project – one of the largest attempted coral restorations ever. With this technique, transplanted coral can grow up to fifty times faster than they would in the wild.

Vaughan and his team have already begun transplanting 4,000 microfragments from the nursery into the wild. And, although some parrotfish predation halted initial efforts, new steps are effectively combating this issue.

It seems that microfragmenting holds much promise. Dr. Vaughan is optimistic: “At worst, we’re buying time. At best, we could restore the ecosystem.”

Many bighorn sheep are now being relocated in an effort to reestablish the animals in their original range, which spans from Nevada to the Dakotas, after unregulated hunting and disease reduced wild populations.

This year, Boyan Slat turned 20. Although very young, he has already spent several years developing a solution to the millions of tons of plastic in the ocean. After diving in Greece at the age of 16, Slat was disgusted by the amount of garbage he saw and spent the next six months studying plastic pollution and developing a solution.

In 2012, Slat, along with a team he had built of 100 scientists and engineers, presented his passive cleanup concept. By this time, he was enrolled in an aerospace engineering program but soon dropped out to devote all of his time and energy to his project, dubbed Ocean Cleanup.

One year later, Slat and his team came out with a 530 page report demonstrating the technological and financial viability of the project. To get the funding he needed to start the pilot phase, Slat started a crowdfunding operation and within 100 days had received $2.2 million from 38,000 people in 160 different countries.

Slat’s idea is to place several floating arms with nets dropping 3 meters below the surface of the water. The technology will trap plastic while allowing sea life to swim safely below.  Positioning is key. The netting must be in the path of the powerful ocean currents which govern the movement of the plastic around the globe. This is no small task, however, as each arm will be 30 miles long.

Despite its ambition, Slat’s project has shown no signs of slowing down. Ocean Cleanup expects the first pilot to be in position within one year, and have a fully operation set up in one of five ocean gyres within three years.

Each gyre represents a massive undertaking. Heavy currents circulate profuse amounts of trash and span hundreds of miles. Nonetheless, computer simulations show that the floating barriers will be able to collect 42% of all plastic within a gyre within 10 years of initial setup. But it won’t come cheap. The estimated cost of cleanup in one gyre is close to $400 million, or $5.67 per kilogram of plastic.

This effort is so critical because of the many ways plastic is detrimental to the ocean environment and its inhabitants. Marine organisms can become entangled in plastic debris, causing “injury, illness, suffocation, starvation, and even death.” Small pieces of plastic are often ingested, leading to “malnutrition, intestinal blockage and death.” And in addition, plastics are produced from petroleum, natural gas, or coal and a toxic cocktail of chemicals like polyethylene terephthalate (makes it virtually impossible for plastic to biodegrade) and bisphenol-A, the latter of which is known for its carcinogenic properties. When organisms ingest plastic and digest it, these chemicals move up the food chain, increasing in concentration and thus toxicity through biomagnification. Every year, “one million seabirds and hundreds of thousands of marine mammals die” from this pollution.

Thanks to Slat’s efforts, this could change very soon. 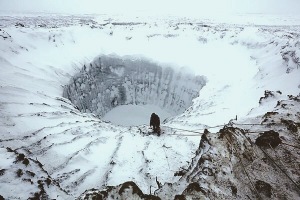 This photo depicts a scientist from a Russian expedition deployed to learn more about the mysterious crater that appeared in Siberia this past July. There is some speculation that the 54-feet deep crater was caused by the melting of methane hydrate, a chemical normally frozen below ground.

For the first time in 60 years, the Kashmir musk deer was spotted in Afghanistan. Four individual deer were reported in a study recently published in Oryx Magazine. The last recorded sighting of the vampire-like fanged species dates back to 1948, when it was seen by a Dutch survey team passing through the area.

This news comes long after the species was believed to have gone extinct. The small deer were relentlessly targeted by poachers and wildlife traffickers who sought their scent glands, worth their weight in gold. The glands contain a pheromone frequently used in perfume and currently fetch $45,000 per kilo on the black market.

The deer are small, standing below two feet, and are native to Afghanistan, Pakistan, and India. They prefer rocky alpine habitats and rugged forested areas. Six similar species are found in Asia, but the Kashmir species is the only one listed as endangered. The “fangs” for which the deer are known are actually tusks that males use during rutting (mating) season to spar with other males and attract females.

The authors of the study are quick to note that while the recent sightings bode well for the deer, the species is still at risk. Efforts to end poaching and reduce habitat loss must be ongoing in order for the species to fully recover. One of the authors, Peter Zahler, calls the musk deer “one of Afghanistan’s living treasures” and, along with the snow leopard, comprises the “natural heritage of this struggling nation,” and must be saved.

By attaching specialized filters to his camera, David Gruber gained a fisheye view of the ocean. What he found is a stunning display of fluorescence by hundreds of different species. Watch the amazing video here!

A few weeks ago, two white lion cubs were born in a Belgrade Zoo and are reported to be in great health.  A zoo volunteer reports that they will not, however, be staying there long.  This is due to both the popularity of the rare cubs and the exchange program in which the Belgrade Zoo participates.

White lions are not albino. Their coloring is a recessive trait that results from a less potent mutation in the same gene that causes albinism. Their condition, technically referred to as leucism, is characterized by reduced production of all pigments, not just melanin (as in albinism). White tigers are so colored because of a similar mutation.

Their white or light blonde coat makes these lions quite striking and has accorded them significant spiritual importance in Africa. Although the first recorded sighting of one of these big cats was not until 1938, they are thought to be indigenous to the Timbavati region of South Africa. Zulu shamans believe these cats come from the stars and inhabit Earth to fulfill a special purpose as messengers from God.  The white lions are a sacred animal in South Africa and have come to be regarded as guardians of the land.

Sadly, the presence of the white lions in their native habitat has dwindled because of the commercial demand from zoos and circuses. In addition, the cats are often used in camps where tourists go to pay to hunt various exotic African species.

One woman is fighting to protect these remarkable cats. In 2002, Linda Tucker purchased 5,000 acres of land in Timbavati, home to several white lions, and started the Global White Lion Protection Trust (WLT). Today, several lion ecologists live on the property to ensure the health of the animals and discourage poaching.  This approach seems to be working, as three small prides are thriving on the WLT land.   To watch a video of the white lion cubs in Serbia, click here.

The latest frontier to be explored by Google Earth Streetview is the ocean. As a part of this exciting effort, over 400,000 panoramic photos have been taken of the watery world, including coral reefs and the deep sea. Although not all panoramas are available online yet, many dazzling shots can be seen here.

The sponsor behind this project is Catlin Seaview Survey, a scientifically minded organization that hopes to record the world’s reefs in 360º to increase appreciation and thus the effort to save and conserve them. But the photos serve as more than simple aesthetic pleasures. They are also valuable data points that will provide a baseline for reef health. By comparing the panoramas that are being taken now to those that will be taken later, researchers can monitor the effects of such detriments as pollution, acidification, and severe weather.

In addition to the photos, scientists with the CSS are also collecting tissue samples for further studies and using PAM (Pulsed Amplitude Modulated) stress detection devices to detect stress in deep waters without having to send divers.

This project is so vital because over 500 million people around the world depend on coral reefs, whether it’s for food, tourism revenue, or storm buffering. It is not some esoteric study that will be buried in scientific journals. All data is publicly available on the Catlin website and will hopefully encourage action to protect these reefs. 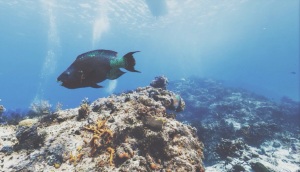 Formerly, scientific researchers studying polar bears had no choice but to tranquilize the animals in order to fit collars and collect samples if they needed information.  Now, learning more about the white bear of the north may be as simple as locating a few footprints.

A new research method involves collecting snow around the prints the bears leave behind as they trek across the Arctic, melting down that snow, and filtering it to extract DNA from the remaining cells.

On a recent WWF expedition to the Svalbard Islands of Norway, researchers had great success using this procedure.  Snow was collected from 10 prints left by a female polar bear.  DNA evidence showed that a seal and seagull were both present.  The seal blood present indicated that the bear had killed the seal.  Scientists at the French genetic firm Spygen speculated that the seagull arrived later to feast on the leftovers.

The implications of extracting DNA from footprints are far reaching, as just one cell can provide much information.  This technique has also been used successfully on a brown bear track left in the mud and Scientists at the University of Grenoble are hoping to use a similar method to analyze water samples and determine what species of fish and amphibians are present. 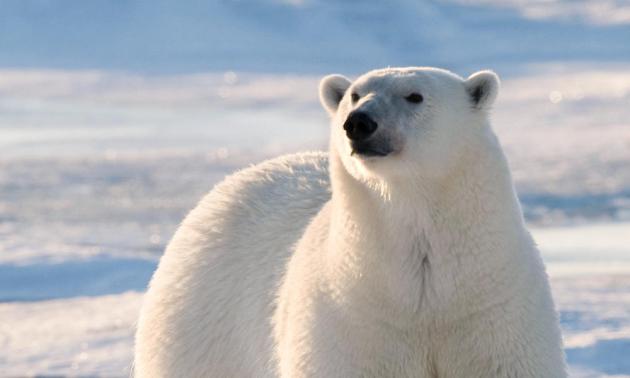 The endangered species was spotted in the Quang Nam Province of Vietnam.  Its presence in the forests there indicates increased ecosystem health after the start of the ambitious Carbon and Biodiversity Programme.  The initiative, which tracks wild animals with camera traps and implements a “forest guard” of law enforcement officers trained to combat poaching, seems to be off to a great start.